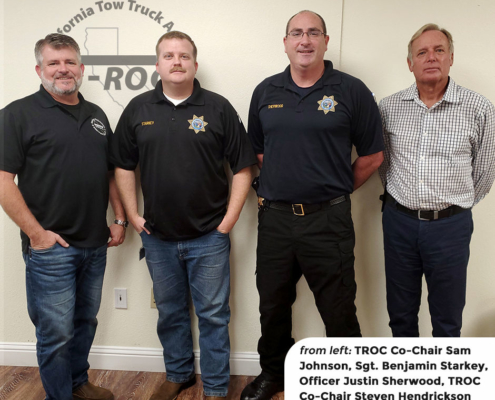 After months of negotiations, CTTA is pleased to announce that it has agreed to co-sponsor AB 2392 (Santiago), a bill originally introduced by Assembly Member Miguel Santiago (D-Los Angeles) at the request of the insurance industry to address abusive practices in the towing industry.  CTTA would like to thank its T-ROC (Towing Regulatory Oversight Council) for their dedication and hard work on this bill, which if left unattended, would have dramatically impacted each California towing company’s business in a very negative way.

After the bill’s original introduction in February 2018, the T-ROC immediately began work dissecting the bill line-by-line to detect problematic provisions and, where appropriate, identify workable alternatives to present to the bill’s proponents and author.  Subsequently, the T-ROC successfully spearheaded the negotiations with the following stakeholders on the bill, each of whom had a different vision for how to “fix” the towing industry:

A compromise was ultimately reached and the bill was amended to address the T-ROC’s primary concerns.  Through these negotiations the T-ROC was able to enact the following positive changes to the bill:

The bill was passed off the Assembly Floor with bipartisan support on May 29th and will now head to the Senate where it must be passed by June 29th.